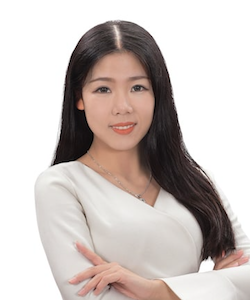 Ms. Liu obtained her bachelor’s degree of law (LLB) from Shanghai Jiao Tong University and her master’s degree of law (LLM) from the University of California Hastings College of Law. While at UC Hastings College of Law, she served as the research assistant of Professor Frank H. Wu, the ex-chancellor of UC Hastings, and the first Chinese American chancellor, in the research of cases about human rights and democracy in modern US society.

Ms. Liu is also a LinkedIn columnist as well as the founder of a social media platform, which attracted more than 100,000 subscribers.

Represented clients in more than 30 M&A deals, amounts ranging from $3 million to $75 million.

Contact Us
Practice Areas
Client Reviews
★★★★★
When it came time to setting up a corporation for our law firm—which does not do corporate work—I trusted SLG to set us up and keep us compliant with corporate requirements. Their reputation is pre-eminent among attorneys. Law Firm President
★★★★★
Thanks to Structure Law Group for orchestrating a difficult project and for interacting with the counter-party with an effective combination of both gravitas and finesse. Result: the Impossible became Possible. Gated Clock
★★★★★
They diligently analyzed the strengths and weaknesses of our case and when the other side did not see it the same way, they did not hesitate to go to trial where we won a complete victory. Real Estate Developer
★★★★★
We had a difficult situation with a problem employee. SLG had the perfect blend of strategy and diplomacy to sever the relationship and minimize any and all potential fall-out. We would highly recommend turning to SLG for any employment-related issue that comes up. Employee Benefits Consulting Company President
★★★★★
LG's attorneys have helped guide us through four lawsuits, waiver forms and other documents set up to help protect our company. Karting Company CEO
View More
Submit a Law Firm Client Review